T’was The Night Before CFI Christmas 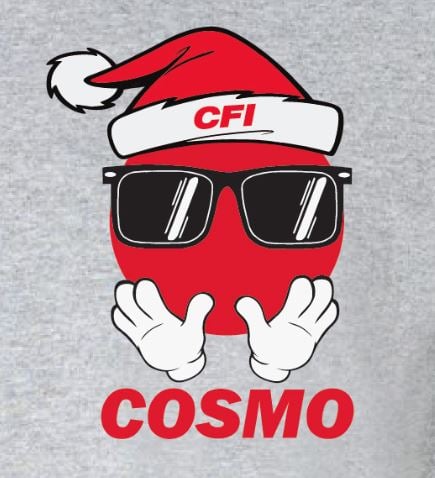 Adapted from the original poem T'was a Night Before Christmas

T’was the night before Christmas and all through the yard

Not a trailer was moving, not even one;

The keys were hung on the hook with care,

In hopes that Tim Staroba and Greg Orr soon would be there;

The drivers were nestled, all snug in their rigs,

While visions of road maps dancing in their heads;

Snuggly wrapped in their blankets and CFI sock caps,

Had just settled down for a long winter's nap.

When out in the yard arose such a clatter,

They sprung from their bunks to see what was the matter.

Away to the door they flew like a flash,

Tore open the door with an icy cold blast, saw all trucks and trailers as they threw up the sash.

The moon on the new-fallen snow

Gave both trucks and trailers a cool white glow

When, what to their wondering eyes should appear,

But a miniature sleigh, and eight tiny reindeer.

Two men in Santa hats, so lively and quick,

We knew in a moment it was Tim and Greg headed down quick!

More rapid than eagles their courses they came,

And they laughed and they shouted and called them by name:

On, COMET! On CUPID! On DONNER and BLITZEN!

And then, in a twinkling, they heard on the roof

The prancing and pawing of each little hoof.

As they drew in their hands, and were turning around,

Down the smoke stack tumbled Tim and Greg with a bound.

They were dressed all in red CFI gear and smiling and were a sight.

Their clothes were tarnished with oil and smoke in the light,

A bag full of goodies they had flung on their back,

And they happily shouted “Happy Holidays!” as they opened the pack.

Greg said: “We want to thank you for all your hard work this year”

With a smile on his face he passed out new CFI gear!

Once they were done they looked all around,

Counting the trucks to visit on the ground.

They went on their way, stopping at each truck with a gift from the pack,

Bid them all a good night and told them to watch as they back.

They laughed as they climbed back on the sleigh,

And with a snap of the reins they were up and away!

Tim and Greg to his team gave a whistle,

And away they flew like the down of a thistle.

But drivers heard them exclaim, ere they drove out of sight,

HAPPY CFI CHRISTMAS TO ALL, AND TO ALL A GOOD-NIGHT!

Nancy is a Procurement Specialist Sr. for CFI.