True to Truckload & True to the Troops: An Interview with Tomy Fox

We recently caught up with Tomy Fox, a longtime Con-way Truckload driver and driver trainer, and one of our two True to the Troops truck representatives. For the past month, Tomy has been travelling the country with the True to the Troops truck. In the last two weeks, Tomy has an additional honor to transport The Wall That Heals, a mobile replica of the Vietnam Veterans’ Memorial. A Vietnam veteran himself, Tomy shared his experiences transporting The Wall. Currently Tomy is transporting a part of the memorial, a motorcycle that was damaged, from Utah to Texas to be repainted.

Q: What does it mean to you to be representing Con-way Truckload’s True to the Troops campaign?

It is an honor. It’s a privilege to be able to represent our company in front of other veterans and let them know someone cares - that Con-way Truckload cares.

Q: What has been your favorite part of driving the True to the Troops truck?

Definitely my time transporting The Wall that Heals. That has been a super honor, especially because I am a Vietnam veteran. I have met hundreds of other Vietnam veterans. We reminisce and talk about our time of service.

I have had the Wall for two weeks and I have it another week and a half, but I would just as soon transport it for the rest of my time with the True to Troops truck!

A lot of the veterans who visit recognize names on the Wall, which makes it personal to them. It’s amazing to watch them come up here because when they leave they feel better. They paid their respects.

Also, parents bring their kids out here to teach them about the Vietnam War. In Michigan, a school bus pulled up filled with high school students. Their teacher asked them to pick a name on the wall and write it down. Then we helped them print out the life stories that go along with the names – their families, their history. The kids really liked it.

NOTE FROM TOMY: If you want info about anyone whose name is on the Wall That Heals, visit www.VVMF.org.

Q: Can you tell us a little bit about your time in the service?

I joined in 1972 and I was out in 1993. To be honest, I really enjoyed it. During my military career, I went places and did things that most Air Force servicemen don’t get to do – I was really lucky.

In the Air Force I spent time in Vietnam but I also served in Iran, Jordan, Ethiopia, Kenya, Taiwan, Japan, India and many European countries. Part of the career was to travel so I got to see some really neat places.

Q: What does it mean to you when someone thanks you for your service?

Well, that’s a tough question. We (Vietnam veterans) were treated badly when we returned from war. I guess it is better late than never but it still hurts the way we were treated 40 years ago. I do really appreciate it and I get it all the time with this truck. The support I receive everywhere is really astonishing. And, a late “thank you” is better than none at all.

Q: Can you tell us about the special gift you received recently?

We were in Hoffman Estates, Illinois, right outside of Chicago. We had the wall up and had kids go through the truck. He was in the truck for a while - it was just he and I. I answered all his questions about the truck. His mom was really nice and they thanked me for sharing this information with their son. Well, they came back the next day and the boy handed me a hand-painted American flag card. He did it on his own. He came up with the idea, painted it and wrote in it all by himself. He wrote “I salute you! God bless you. Thank you for serving our country and for showing me your truck. Grateful! God’s blessings Jonah”

It made me feel like a million bucks. It was so out of the blue. I have it pinned inside my sleeper now. I am hoping we can put it in a trophy case back at headquarters when I get back. 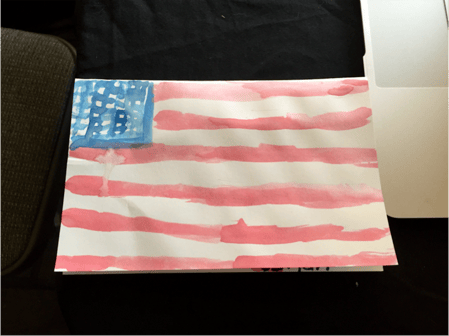 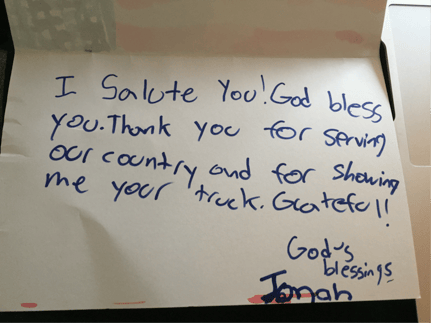 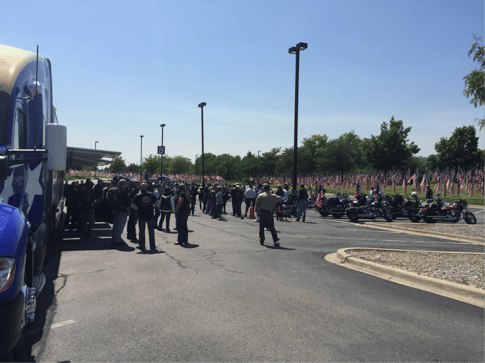