Have you ever thought about running a marathon?

Get inspired. We found two Con-way Truckload drivers who train for and run marathons in their free time. David Froysa has 17 marathons under his belt, while Sheena Taylor ran her first marathon last month.

Sheena made a goal last April 2012 to be able to run a full marathon in 1 year. "My goal was just to finish. I wasn't too worried about my time. I just wanted to complete it," she said. I ran this marathon (my first one) in Lovell Canyon, Las Vegas, NV at the Labor of Love Marathon race. My official time was 5hrs 56 mins. 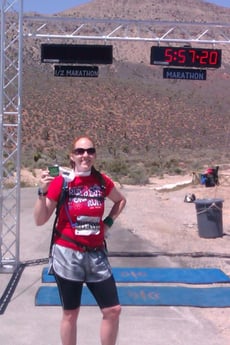 Read in Sheena's own words how she set a goal and made it happen.

I started running because I wanted to lose weight. I gained quite a bit being out here. My husband and I started counting calories and that helped lose some weight but it can be hard out here to eat healthy so I wanted to have another way to help burn calories if I didn't eat like I should one day. So I started running and I have lost 18 more lbs since this time last year.

You don't just start training for a marathon, especially if you're not a runner. I hadn't run in years so I had to start from scratch. So I found the Couch to 5K program and started there. Basically it starts you off slowly and then by the end of 9 weeks or so you should be able to jog 3.2 miles without stopping. It took me almost 10 weeks because of the schedule we keep out here. You never know exactly when you're going to have time to run. So I would run 2 days in a row sometimes if I had the time just so I could get that weeks running schedule accomplished. And on the flip side there were times where I went days without being able to run because we were so busy.

I ran my first 5k race in October. Once I could run about 3 miles without stopping then marathon training is basically the same you are just running more miles. So one week I might run 3 miles one day, 5 the day after, 8 etc etc. You just keep building on that. I ran my first Half marathon in January with a time of 2 hrs 46mins. Then continued to run further and further whenever I could. I would run in truckstops or nearby if the neighborhood was nice. I ran my 20 miler around Amarillo, TX. We even went on a cruise in Feb and I ran almost everyday on it! I gave myself a year goal because I know training is slow and with the job we have you just never know when you will have the time. So you really have to take advantage of every minute of extra time you have. 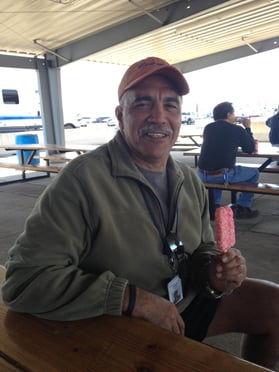 David Froysa, a Con-way Truckload driver with 17 marathons under his belt, jokes he is in the "Clydesdale" running division. You qualify for this distinction if you are a male runner over 180 lbs.

As far as staying motivated the biggest thing that helped me was setting a goal. Even though it was a big goal, I started the Couch to 5K 2 years ago, but quit within the first week because I didn't have a goal. This time I set a goal and every time I got frustrated, tired or lazy, I would just think that I don't want to fail. I also wouldn't be hard on myself if I didn't get in a run one day. Occasionally I would have bad days and wouldn't want to run at all. But, you get past that. Just go at your pace.

Oh and running does become addictive! Now, I will continue running and start working on getting faster. My next goal is to qualify to be able to run in Boston. I haven't set a time table yet for that, as it will take a while.

---
If you have any questions for these drivers, post them in the comments section below. For more information on how to get started, check out this article from Runner's World.