Team Driving with a Spouse: Barbara and Richard Cummins

When Barbara Cummins met her husband Richard, truck driving was the last career she ever thought she would end up pursuing. Richard had been driving for Con-way Truckload and Barbara was a teacher. When they fell in love and got married, Barbara’s goals changed.

“I was afraid of driving anything bigger than an SUV,” she said. “But Richard suggested that being a team on the road would be fun, so I gave it a shot.”

Barbara and Richard have been on the road together for nine years, so far.

According to the couple, the best parts of driving together are enjoying the interesting sights and experiences, having someone to share every day with and never having to worry about being lonely. They don’t have to miss one another.

There are challenges to being on the road together as a married couple, however.

“As a team, one of you is usually working,” said Richard. “There can be a lack of free time together. And, there is very little space.”

Richard notes, the fact that his wife is always by his side makes up for the drawbacks, however. “I would never continue to do this without her.”

The Cumminses stressed that the trucking life isn’t for every couple. They made a pact at the beginning of their adventure on the road that they would put their relationship first. If either of them chose not to continue driving, they would both stop. They also stress communication as being a key aspect to enjoying time on the road together.

“When we talk to other couples, most of them can’t spend too much time together if they want their marriage to survive,” said Richard. “If you enjoy spending time together, there is no job better than this. Every day is an adventure.”

Do you have any tips or stories about your time on the road as a team driver with your spouse? Share them on our Facebook page, www.facebook.com/Con-wayTruckload. 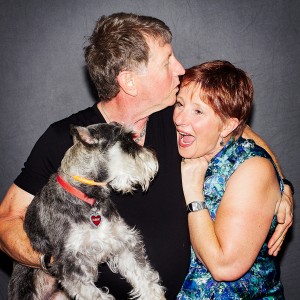