“I had been living this way for so long, I thought it was normal.”

Con-way Truckload driver Steven Sassamanshausen, 53, hadn’t been sleeping well for years. He was getting eight hours of sleep a night, but would soon grow tired after a few short hours. Despite his chronic fatigue, he would try to power through most days. It wasn’t until a routine agility, eye and physical test when the doctor asked Steven if he snored that the serious issue was revealed.

“I told them I snored like a bull-moose!” Steven said. That same night, he was sent home with a sleep study machine for a test.

“The first night the thing slipped off and only registered three hours,” Steven says, noting the doctor needed him to get a full night’s sleep with the CPAP in place. “So I had to try again the next night and that time it worked.” Steven was diagnosed with sleep apnea the next day.

As we’ve mentioned in previous Sleep Apnea posts, Positive Airway Pressure (PAP) is a mode of respiratory ventilation used primarily in the treatment of sleep apnea. CPAP stands for “continuous positive airway pressure,” used by placing a mask over the nose and mouth connected to the machine.

Steven’s initial concern was the cost of the CPAP machine. But after talking to a colleague on the Con-way Truckload Safety Team, Steven was assured the company would help him work out a plan. 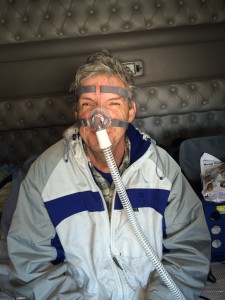 “It’s the best money I have ever spent and I’m grateful for the support from my company,” Steven says. “I’m ecstatic – I feel good knowing every morning I will wake up refreshed.” Now Steven’s mission is to convince other drivers suffering from sleep apnea to get the CPAP machine. He believes it has made him a better driver.

“Before the CPAP, I would get eight hours of sleep and never feel rested. Now even if I only get three to four hours, I am more rested because my quality of sleep is better!” he said. “Anyone out there who snores and thinks they are getting a good night’s rest – they might not be. They need to get tested and try this machine, because it will change their lives dramatically.”

Steven reports that he not only feels more confident as a driver but that he is more aware and alert — at one point he was turning to soda in order to stay awake. Now he doesn’t have to.

“I’m healthier now,” Steven says. “I haven’t needed a soda to stay alert since I started the machine and I make healthier and wiser decisions because I feel more awake. This thing has turned my life around and I’m a better, safer driver for it.”