Remember CFI? You will. 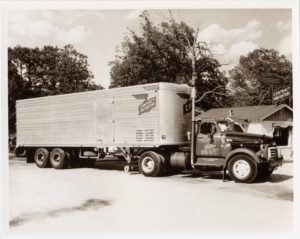 On Thursday, October 27, XPO Logistics announced it had reached an agreement with a leader in the North American transportation and logistics industry, TransForce, to purchase the company. As we return to our heritage as a standalone truckload company, it is my honor to reintroduce you to CFI, our original name which we will be bringing back as a result of this transaction.

The CFI name carries a lot meaning for both our customers and employees. The company was founded in 1951 with only two trailers. Seven years later, we purchased our first company truck. Fast forward to 2016 and we have grown to more than 2,400 trucks and more than 7,000 trailers.

Tim Hicks has been with the company since 1992, when he started as a professional driver and held various positions in our operations and planning department before accepting the position of driver advocate in March 2014.

Prior to joining CFI, Hicks served in the United States Air Force.

“I did a lot of research prior to separating from the USAF. This was before the Internet and Google, so I was writing and calling companies to get information or hanging out at truck stops asking drivers questions,” he said. “I would go to Oklahoma City to the Petro and one of the first things I remember seeing was the CFI trucks. Clean, red trucks with clean, white trailers. They were conventional tractors, while almost everybody was still running cab overs.”

Hicks eventually made his way to CFI headquarters in Joplin and met with Arnie Rosa, a driver recruiter who Hicks had been communicating with.

“Arnie told me that CFI only hired one out of every 20 drivers. It was a big deal to get on here,” he said. “[On my tour] he showed the shop and the operations department and that’s what sold me. I liked that they were what appeared to be a top-notch operation.”

CFI hauled for companies like Ford, GM and shutting down an auto plant was unheard of.

Hicks’ first truck was an ’89 Flat Top Kenworth with a 350 Cummins and, he said, it was common for “drivers to polish chrome or to be seen lettering tires on down time.”

“I loved driving a truck back then,” he said.

While driving a “Red Racer” didn’t hurt, he said there was something else that contributed to that feeling.

“There was pride in the company and respect between our driving and non-driving staff, customers and our peers in the industry,” he said.

“Drivers who wanted to work hard came to work for us," he said. "Customers who demanded premium service called us. CFI is about pride; pride in our company and in our employees, pride in our equipment and pride in our customers. I want [that] for all of us.”