On Saturday, December 12, thousands of people gathered at veterans’ memorials all across the country to take part in National Wreaths Across America Day. The event is held to honor our country’s fallen servicemen and women, as well as their families. On this day, remembrance wreaths are placed on the memorial sites of these men and women, in total over 900,000 wreaths were laid this year. Each wreath originates in Maine and is transported around the country by volunteer members of the trucking community. XPO Logistics is proud to have helped this cause by donating $10,000 and transporting five truckloads, or 25,000 wreaths, to Houston National Cemetery (HNC) in Houston, Texas. 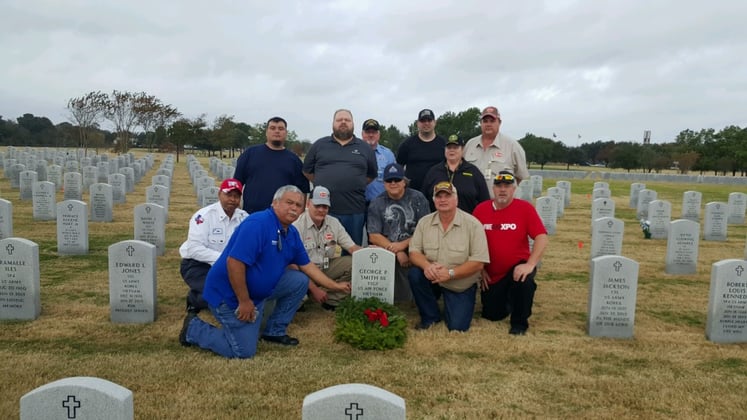 Tim Hicks and Felix Medina are two of our professional drivers who helped transport the wreaths. On Wreaths Across America Day, Tim and Felix took part in a special convoy that traveled through Houston on route to the cemetery. Upon reaching the cemetery, Hicks recalls: “The skies were grey, which seemed to be fitting for this day. A marine and an army soldier played Echo Taps and then it started to rain. Most people just stood there in the rain and paid their respects. That was a very emotional thing to experience. Then it stopped raining. The wreaths were laid, then the rain came again, like it was on cue.”

Tim is a veteran of the United States Air Force and currently works as a driver advocate for XPO Logistics. His father was in the United States Army and served in both WWII and Korea. His brother served in the Air Force and his nephew serves in the Marine Corps. Tim had the honor of transporting his wreaths to Houston in the True to the Troops Truck and upon arriving at the cemetery, Tim met a mother whose son was buried there. “She asked which truck I drove, and I showed her a picture of the “Star Spangled Truck” (as I call it). She showed me a picture she took of the truck as it was pulling into HNC and then told me how great it was that XPO Logistics takes part in this event. 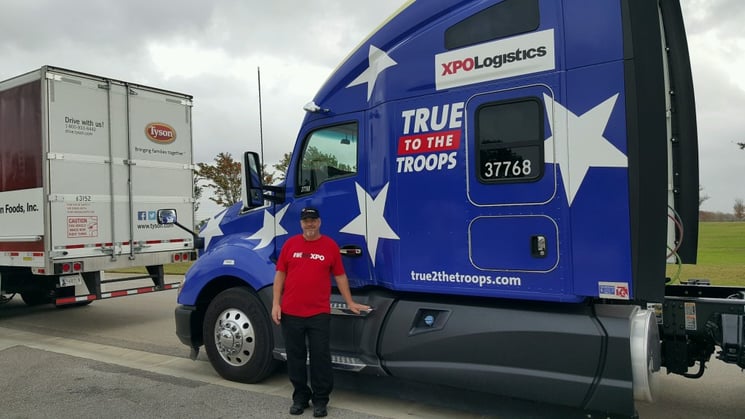 For Felix Medina, Wreaths Across America day gave him the opportunity to connect with his aunt, a veteran of the United States army. The two walked the cemetery together, placing wreaths on various graves. “It was very touching. I took the time to appreciate the person whose memorial I was honoring. It was even more touching to watch my Aunt participate. It reminded me how much I appreciate her. She was very thankful to be able to be a part of the day,” said Felix.

After the event was over, Felix and Tim looked back on what they took away from the experience. “Appreciation,” said Felix. “It’s important to appreciate every soldier and be there for them just like they’re always there for us.” This was not Tim’s first Wreaths Across America experience, but that didn’t stop the day from having an immense impact on him. “To watch mothers and fathers grieve for those who willingly made the ultimate sacrifice was a humbling experience,” said Hicks. “Saturday made me proud to be a veteran and a driver.”