Averaging from 4 to 8 pounds, the cylinder shaped spaghetti squash is generally available year-round with a peak season from early fall through winter. While a true spaghetti squash is pale ivory to pale yellow in color, in the early 1990's, an orange spaghetti squash, known as "Orangetti" was developed and this is what is frequently found in today's supermarkets. Higher in beta carotene, the orange variety is also bit sweeter than its paler counterpart, although both have a mild flavor that is easily enhanced by the food served with or on it. A dieter's dream, a four-ounce serving of spaghetti squash has only 37 calories. 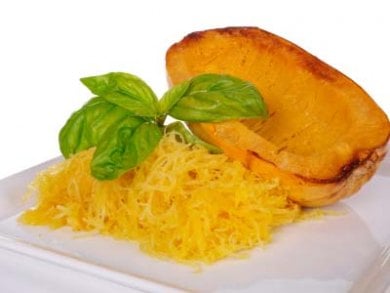 Slow Cooker or Crock-Pot:
Choose a smaller spaghetti squash (unless you have an extra large slow cooker) so that it will fit. Add 2 cups of water to slow cooker. Pierce the whole shell several times with a large fork or skewer, add to Crock Pot, cover and cook on low for 8 to 9 hours.

Once the squash is cooked, let it cool for 10 to 20 minutes so it will be easier to handle, before cutting in half (if it wasn't already) and removing the seeds. Pull a fork lengthwise through the flesh to separate it into long strands. (See photos.) You can do these steps ahead of time, then prepare spaghetti squash recipes whenever the mood strikes

More tips and recipes for cooking with spaghetti squash