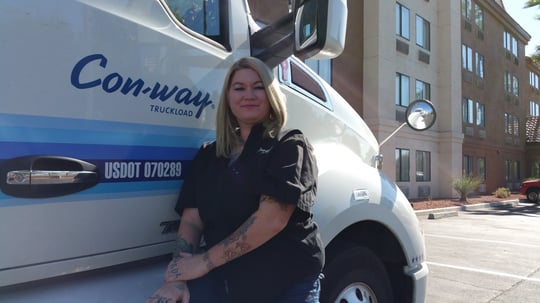 Ever wonder what you could do if there were more hours in the day? Con-way Truckload driver Casey Wortham has the same number of hours as the rest of us, but with some impressive scheduling skills and a whole lot of passion, she is on her way to starting her own nonprofit. Last weekend, Casey coordinated and hosted (along with her sister, Jodie) an event called Kicks for Kicks that took place in Casey’s hometown of Lubbock, Texas. The goal of the event was to collect new shoes for school-aged children in need. The event was a huge success, and thanks to Casey, 26 children in Texas will begin the new school year with a newfound sense of confidence.

We took some time to chat with Casey about her passion for volunteering and charity work. We are so proud to have Casey on the Con-way Truckload team!

Q: How did you become so passionate about giving back to the community?

Casey Wortham: Giving back has always been something that I’ve been interested in doing. As I got older, and pursued better jobs, and met more people, my passion evolved into an idea: “Let’s do fundraisers!”

Kicks for Kicks was the brainchild of my sister, Jodie and myself. Separately, she and I have been hosting fundraisers for a while and this was our first one together. Between the two of us, it was really cool to see our ideas and resources come together.

Q: What are some examples of events and fundraisers you have hosted?

CW: We did a breast cancer awareness fundraiser for a woman in Amarillo, Texas a few years ago. It was a huge tri-state event. We ended up raising about $11,000 to help with her medical bills – it was amazing. That was my first taste of how big fundraisers could be. Every November we also do a “Thanks-4-Giving” food drive.

If a situation arises and we think we can give back, we will.

Q: Have you come across any challenges? And how have you overcome them?

We have come across a lot of challenges. The biggest challenge is that we don’t have a 501c3 certification as an official nonprofit organization. It’s a big deal, especially when you are dealing with fundraising for an individual. It affects how people view you, and it can be difficult to get donors when you don’t have that certification.

We have overcome this challenge so far. I will literally sit down at work on my lunch break, grab a phone book and start making calls in the “As.”  Usually I get more “no’s” than I do “yes’s” but I do get a lot of “yes’s.”

Q: What do you foresee in the future for your charity campaigns?

We are definitely looking into getting our 501c3, which apparently is a long process. We are taking that slow. Hopefully by the end of next year we will have it ready to go. We would like to expand our fundraisers to something big. Next year, I think Kicks for Kicks will run tandem in Abilene and Lubbock, Texas, to bring in shoes for children in the entire South Plains area.

Also, our Thanks-4-Giving event is so fun because it is a carnival, and I love carnivals. This year will be our second year hosting that activity and the public is welcome!

Q: How has being employed by Con-way Truckload helped make your charity activities successful?

When I reached out to Con-way Truckload’s communications team to help with Kicks for Kicks, the response I got was so awesome. It opened up a new broader connection as far as helping to get support. It is extremely awesome to have a trucking company behind you, especially because I have such a small car! The support is really overwhelming. I would like to thank the communications team, load planners, fleet managers and everyone who worked to get me home for Kicks for Kicks. I also want to shout out to some of my fellow drivers, Becky Kerr, Becky Austin, and Mindy and Chris Breen for their support and donations. It is really cool to have the backing of a company and friends who don’t live locally but are willing to help make a fundraiser happen for the good of the community.

Photos from Kicks for Kicks!: 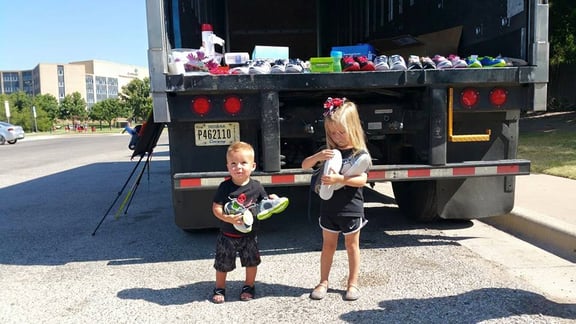 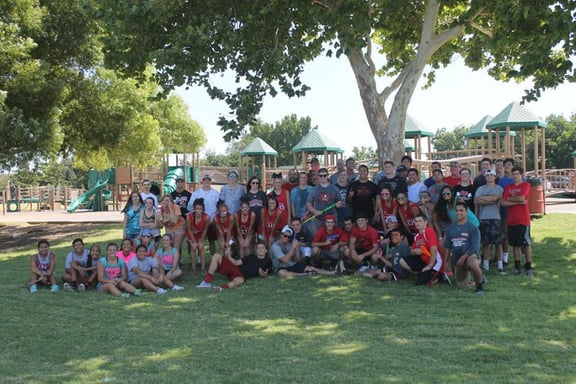 To stay up-to-date on Casey's fundraising activities, visit her Facebook page, Come One, Come All, Come Get Your Fundraiser On!