Have you driven a 20-wheeler? 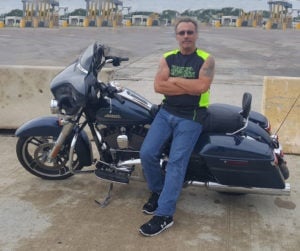 James Smith has been driving for CFI as an Independent Contractor since 2015. While most drivers sit behind the wheel of a an 18-wheeler, Smith prefers his 20-wheeler. Smith built a lift on the back of his truck for his Harley Davidson so he is always able to pursue his passion.

How long have you been driving? 32 years and I seem to learn [new] stuff all of the time.

What made you pursue this career path? I got talked into it at a young age and kind of fell in love with it. I get to travel all over the country and I get paid to see all kinds of cool stuff. I liked this job so much I got my son into it. He actually drives for CFI too and lives down in Laredo. I have to laugh because most people pay thousands of dollars to travel overseas for vacation, but there are so many awesome things to do here in the United States. I actually ended up at Mt. Rushmore at the 20th Anniversary and ran into a guy who worked on it. That was really cool. There is more to see in this country then you know.

What is the most valuable thing you’ve learned over the years? Patience. Most of the guys laugh at me because [when] I hit traffic jams I don’t care. I just kind of relax and pull through it. I don’t let any of this upset me. Something else I would [say] is time management. If you can’t get that right you’re going to screw up every aspect of this job.

What is your favorite aspect of driving? The travel part of it. I get to meet a lot of really cool people and if I had a chance I would do this all over again. 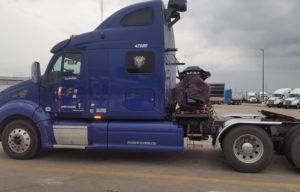 Hobbies? I’ve been riding since I was 16. My dad was Harley man as far back as I can remember. My brothers and I all ride and meet up when we can to go riding. I have three children, two sons and a daughter, and the only one that doesn’t ride is my middle son. I have always had a bike on the truck. I worked with a moving company for 16 years and when I did that I could just put my bike in the trailer. When I started hauling freight I did some research and ended up building a lift for my Harley. I like taking the bike because [I think] you need to get away from the truck. I’ll usually have to do a 34 hour restart after six days and when that happens I will take the bike off the truck and just go. One of my favorite rides is from Miami, Florida and driving down to the Keys. Driving down that stretch of highway with the ocean on both sides, doesn’t get any better than that.

Would you say it’s important for professional drivers to have hobbies outside the truck? Absolutely. The biggest thing is to try and stay healthy so you can enjoy your hobbies. Choose a parking spot far away from the building and walk around the building a couple of times before going in. Sitting in the truck all of the time will make you crazy and hate the job. I don’t eat bread or drink, but I do smoke so I make sure I walk a lot during the day. When I stop for the day I don’t just sit in the truck. Doing a pre-trip inspection two or three times a day gives you another reason to get out and walk around. I would also add that you need to make sure your hobbies don’t interfere with your job. For example, an Xbox is one of the worst hobbies you can have because it doesn’t get you out of your truck. I have guys tell me they were late to a customer because they got caught up playing a game or overslept because they stayed up too late the night before playing games. You need fresh air, you need move around.

Why do you like to ride? You get to meet a lot of cool people. Like I said, my kids love to ride. In fact, my son took a ride with some people up to New Jersey and I rode up and met them. I usually go up to D.C. and ride in the Rolling Thunder, which is a ride for Veterans. A couple of weeks ago I ended up in Yuma and the Harley dealership there was having a poker run, so I took the bike off for a couple of hours and then came back to the truck. [Riding] is addictive. You meet some really cool people. I have brothers that live in Maryland when I get out that way that’s what we do, we plan to ride. Down in Laredo, there are about five of us with bikes and we like to meet up to ride. The terminal manager down there ended up making a motorcycle parking area just for us.

Favorite place you visited: Arizona. You can be in Phoenix and go to Flagstaff and it’s like you changed countries. You go from desert and rock formations to bears, elk, buffalo and hundred foot trees. The world changes in just five miles. It’s awesome. I try to work as hard as I can during the week so I have to do a 34 hour restart over the weekend.

Advice for others: Keep your mind open. Never be afraid to ask a question. The second you think you know everything about this job you need to get out of the truck because that is when you get reckless.

Don’t always stop at the same stop. When you can, try to go someplace different so you have something new to look at. There’s a lot of interesting stuff to learn about the country, you just have to keep an eye open.